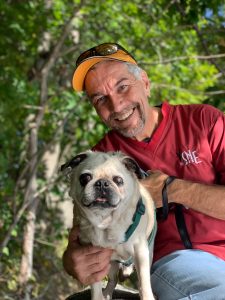 Geoffrey Clark is a native of Massachusetts and spent his early days on the north shore in Danvers, before his family moved to southern California prior to high school. Dr. Clark is a 1986 graduate of the University of California-Davis School of Veterinary Medicine. He completed a 13-month internship at the renowned Animal Medical Center in New York City and then completed a three-year residency in small animal surgery at Tufts University School of Veterinary Medicine and Angell Memorial Animal Hospital. Dr. Clark became board certified in surgery in 1992 when he successfully passed the American College of Veterinary Surgeons (ACVS) certifying examination. He was a staff surgeon at West Los Angeles Veterinary Medical Group and the Animal Surgical Clinic of Seattle. Upon returning to the northeast in 1996, he joined the staff of Dover Veterinary Hospital in Dover, NH. In 1999, he started Veterinary Surgery of New England (VSNE), a mobile surgical referral practice that is now based in Dover. Dr. Clark has provided on-site orthopedic and soft tissue surgery services at over 100 veterinary hospitals in New Hampshire, southern Maine, and northeastern Massachusetts. He has a specific interest in canine knee surgery, fracture repair, and oncologic surgery.

Dr. Clark was the founder and editor of Canine Sports Medicine Update and served as contributing veterinary editor for Field Trial Magazine. He has published numerous scientific papers on a variety of surgical topics and authored chapters in four veterinary textbooks. He has also had canine surgery articles published in Dog Fancy, Dog World, Versatile Hunting Dog, and Dogs in Canada. In 2002, he was the featured speaker for the 18th Annual Canine Sports Medicine Symposium at the University of Florida. Dr. Clark has been an invited speaker at more than 70 veterinary meetings in United States and Canada, including the New England Veterinary Medical Association meetings in 2007, 2008, and 2010.

Dr. Clark resides in Durham, NH with his family. Their home is shared with three cats, an English Setter named Willow and Francis the Wonder Pug.

Font Resize
Contrast
Accessibility by WAH
Call Us Text Us